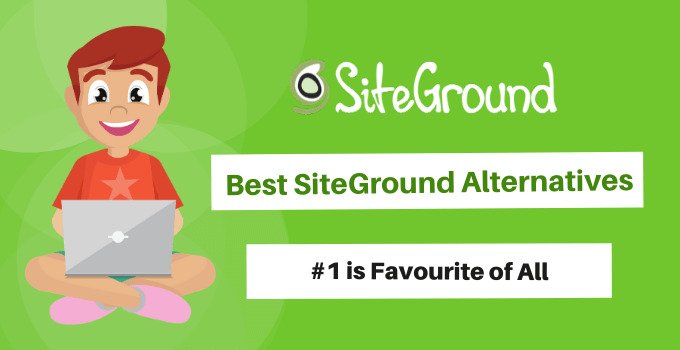 Searching for the best SiteGround alternatives for your website(s)? SiteGround is a much-loved shared web host and the most popular independent hosting option outside of the EIG and GoDaddy empires.

However, multiple recent price increases (in 2018 and 2020), a new dashboard (and a goodbye to cPanel), and some limitations on support options have recently sent a lot of users searching for alternatives.

Thankfully, you have plenty of options, and I’ve collected them for you in this post. In total, I will share five of what I think are the best alternatives to SiteGround. Two of these hosts are cheaper than SiteGround while still offering similar quality and features. Two hosts offer better quality Hosting than SiteGround…but at a slightly higher price. And the fifth host can be both cheaper and better depending on your situation.

You can choose the alternative that best fits your needs, and I’ll make some recommendations at the end of this post.

Before talking about the bad parts of SiteGround, let’s talk about what SiteGround do well, because I still think SiteGround are a great host and, in terms of shared hosting, they’re one of the better options out there:

For shared hosting, SiteGround offer excellent performance. This is especially true on the GrowBig and GoGeek plans, which give you server-level caching. All plans also get access to the SG Optimizer plugin, which offers a lot of the same features that you get in the premium WP Rocket plugin (our review).

Despite some recent hiccups (more on that below), SiteGround still have some of the best support in the shared hosting space.

SiteGround have done a good job of continuously improving their product. For example, moving to Google Cloud infrastructure, offering staging sites on more plans, launching a custom hosting dashboard, etc. Whether or not you think those changes justify the price increases, you can’t say the SiteGround team is just sitting around twiddling their thumbs.

However, while there’s still a lot to like about SiteGround, there are also some downsides, which have become especially apparent in 2020 as SiteGround are making a lot of changes.

The biggest reason to look for an alternative to SiteGround is the price. Over the past few years, SiteGround have had two big price increases — one in 2018 and then another one in June 2020.

SiteGround used to be in the same price range as other shared hosts such as Bluehost and GoDaddy. However, SiteGround are now definitely in a tier above those hosts. So if you loved SiteGround for their low prices, that might have you searching for alternatives.

As of late 2019, SiteGround moved away from cPanel to their own custom hosting dashboard. Personally, I like the new Site Tools dashboard, so I don’t see this has a con. However, I do know that some users were frustrated by this switch and would rather stick with cPanel.

If you are one of the people that prefers cPanel to the new SiteGround Site Tools dashboard, you can find some good cPanel SiteGround alternatives that cost even less.

Unlike other shared hosts, SiteGround don’t try to…”massage the truth” about offering unlimited resources. Personally, I think this is more honest because there really is no such thing as “unlimited” hosting.

However, it’s still tough to understand SiteGround’s limits because SiteGround uses some really technical concepts to limit you, like CPU seconds. If you’re a casual user, it can be hard to understand what the heck those limits mean or how to reduce your CPU seconds (SiteGround have some tips here).

Additionally, there are a lot of frustrated SiteGround users who keep getting told their “CPU usage is too high” (along with a suggestion to upgrade to more expensive hosting!).

Personally, I’ve always had great experiences with SiteGround support and think they have one of the better support services in the shared hosting space. However, over the past year, SiteGound have started throttling support for users who submit an “above average” number of support requests.

Again, this is never something I’ve personally experienced (I’ve hosted at SiteGround for the past three years, but I rarely needed any support). However, it is an issue I’ve seen pop up in the Facebook WordPress hosting groups.

If you like to reach out to support a lot, you can find other quality hosts that won’t throttle support.

Three Best Alternatives That Are Cheaper Than SiteGround

In this first section, I’m going to cover alternatives that are cheaper than SiteGround, while still offering a product that’s close to the same quality. Some of these hosts might not completely match SiteGround in terms of performance. However, they’re pretty close and they’re a lot cheaper.

In the next section, I’ll cover SiteGround alternatives that I think are just plain better products while still being around the same price as SiteGround (maybe a little bit more).

dreamhost are a well-established host that’s been around since all the way back in 1996. They offer incredibly affordable shared hosting plans that are still “pretty good”, though they don’t quite match SiteGround’s performance.

All of their plans come with the following features:

A2hosting are kind of like what SiteGround used to be — a cheap shared host that offers better performance than what their prices suggest.

All* of A2 Hosting’s plans offer the following features:

*The entry-level plan does have some resource limits.

Cloudways are an interesting alternative that could’ve just as well fit in the “better than SiteGround” category. However, they also might be cheaper than SiteGround, depending on your needs, which is why I put them in this category.

The most unique thing about Cloudways is that they don’t have their own hosting infrastructure. Instead, they let you choose your own cloud hosting VPS from providers such as DigitalOcean, Linode, Vultr, AWS, and Google Cloud.

Once you make that choice, Cloudways set everything up and operate much like a traditional host. You’ll also get lots of convenient features:

Cloudways’ prices depend on your underlying cloud hosting. The cheapest option is a DigitalOcean server at $10 per month. All the plans have no arbitrary website or traffic limits — you’ll only be limited by what your VPS can actually handle.

For slightly better performance, I recommend the Vultr High-Frequency (HF) servers, which still start at just $13. Personally, I just migrated some of my own sites from SiteGround to Vultr HF and have been blown away by the performance.

Two (+ One) Best Alternatives That Are Better Than SiteGround

WPX Hosting are an affordable managed WordPress host that make a great option if you want excellent performance and you need to host multiple sites. Unlike a lot of “premium” managed WordPress hosts that only let you have a single site on their entry-level plans, WPX Hosting’s starter plan supports five websites and the following features:

Flywheel are a premium managed WordPress host in the same vein as other hosts such as WP Engine or Kinsta. The reason that I’m recommending Flywheel and not those other hosts has everything to do with price.

Despite being premium managed WordPress hosting, Flywheel still offer a plan for just $15 per month, though it only works for low-traffic sites because it has a 5,000 visit limit. The next tier up is $30 per month which.

In terms of the combination of features, performance, and ease of use, Flywheel are probably the best option on this list. All of the plans give you:

For example, consider the $42 per month DigitalOcean plan with:

This plan will give you a lot more power and performance than the comparatively priced $39.99 SiteGround GoGeek plan (at full price). These higher-resource Cloudways plans also make a good alternative to SiteGround’s cloud hosting.

Which Is the Best SiteGround Alternative for Your Needs?

The best alternative obviously depends on your needs, knowledge level, and what you’re frustrated with SiteGround about. To that end, I’ll run through a few different scenarios and you can pick the one that best fits your situation.

If you’re a casual user and you want something that’s easy to use and cheaper than SiteGround, then I would recommend you go with either A2 Hosting or DreamHost. Both are cheap shared hosts that still offer solid performance, features, and support (for what you’re paying). Go with A2 Hosting for cPanel and the best performance or DreamHost for affordable month-to-month billing.

If you’re a more advanced user, I would recommend you go with Cloudways instead. Cloudways are a little more technical, but still well within the abilities of a non-developer. The upside is that you’ll get very good performance at a price that can be lower than SiteGround. However, I think Cloudways can be overwhelming for total beginners, so I would recommend beginners stick with A2 Hosting or DreamHost.

Finally, if you want something that’s going to flat out offer better performance than SiteGround, WPX Hosting and Flywheel are also great options that have excellent performance and are very beginner-friendly (without being too much more expensive than SiteGround). I would say go with Flywheel if you only have a single site or WPX Hosting if you need to host multiple sites.

Used/using any of these SiteGround alternatives? Thoughts?

Best WordPress LinkedIn Plugins The best plugins will allow you to integrate your LinkedIn profile with your WordPress website....
Read more
WordPress

WordPress Hosting Explained The creation of WordPress began in 2003 as an offshoot of a popular blogging application known...
Read more

In the world of website design, trends come and go. If you want to build a professional and functional WordPress site that...
Read more
Load more